There’s something soothingly familiar when you walk past the glass façade of rue St-Denis’ L’Express. Chic, iconic and effortlessly French, the bistro is beloved by Montreal’s culinary royalty, dedicated patrons, and quite frankly, anyone who appreciates great, honest cuisine française. Add a thoughtfully curated wine list, servers and bartenders – many of whom have worked there for decades – this Montreal institution brings loyalty and charming, professional service à la clientèle to a whole new level.

What is truly amazing though, is how L’Express maintains relevance and continues to inspire its community, globally renowned chefs, and restaurant industry insiders simply by staying timeless in a world that is constantly in flux.

At the ripe old age of 39 – just ten months shy of its 40th birthday – L’Express cemented it’s footprint on Montreal’s culinary scene on December 19th, 1980. Quite literally, too with signage embossed in tiles at the entrance across the outdoor terrace.

Original founding members, the late Colette Brossoit and Pierre Villeneuve, both of whom were actively involved in Quebec’s bustling theater scene, wanted to create a restaurant where one could dine après theatre. It was not only meant to be affordable, but also free from the hierarchy associated with restaurants of the era.

The vision behind L’Express was to offer service publique. As co-owner and former server Josée Profontaine explains, it was “a place where you could eat in your paint covered overalls after renovating your apartment, and at the same time, be comfortable to sit at a table next to the star of the theater.” Interestingly enough, the first time I dined at L’Express as a young teenager in 1989, I was seated across from 80’s pop-star Billy Idol who had just performed at the Montreal Forum.

As I look around today, not much has changed. Mid-day service is buzzing with people from all walks of life: from the chic and the casual, to parents with children, blue and white collar workers, and of course, ladies and lads who lunch. With founding principals etched within the bistro’s walls and quality meticulously down to a tee, the restaurateurs at the helm of this establishment have broken down excellence in dining to a science. You know you’ve hit the culinary jackpot when the best chefs in the city eat here on a regular basis.

The design, spearheaded by late architect Luc Laporte, has stood the test of time since the restaurant’s inception. Deep crimson walls with a bar to match are accessorized with brass accents, large-scale mirrors, and softy-lit circular lanterns.

In true bistro fashion, there are black and white checkered floors and pristine white tablecloths – so very chic, it’s almost cinematic. Jars of cornichons and fresh baguette welcome you upon arrival, as do friendly servers. At the back of the restaurant, a solarium draws in cascading light where vintage photos hang on the walls in abundance, evoking memories and the passage of time.

It’s the significance behind the menu design, however, that is a sentimental one. Handwritten by Colette who passed away in 2014, the owners developed a cursive font in her memory. It is eloquent, moving, and a fitting tribute to the woman who gave L’Express its first breath.

To skim over the deep, extensive wine list and the philosophy behind it would be a disservice to those of you reading this article. Mario Brossoit, Colette’s brother and co-owner, passionately speaks of his desire to democratize wine with hopes of making it accessible to all.

After giving me a behind-the-scenes tour of the cellar, I’m beyond impressed how this small cave à vin – 32 square meters to be exact – can hold 11,000 bottles. Mario has been curating the bistro’s wine list for decades – and from what I’ve heard, he’s somewhat of a godfather and mentor to the who’s who of Montreal’s F&B scene and wine aficionados across the region.

Although not a sommelier by profession, Mario picked up tricks of the trade through hands-on experience and out of sheer interest. It’s not by accident that there are no sommeliers at L’Express. The entire wait-staff has undergone extensive training and are extremely well-versed on the topic.

Mario explains that the best way to serve someone wine is to simply ask what they enjoy and draw upon it.  He always suggests two options: one at a moderate price, and one that is more expensive. If the client leaves it up to him to choose, he provides the cheaper option. That way, he says,  the client won’t feel cheated by a decision based on profit making. It’s a trust relationship built on mutual respect between L’Express and their clientele.

You won’t find any inflated wine markups either. The bistro operates on tight margins. Mario finds it criminal to purchase a bottle at $300 and sell it for 3 times the price. In fact, there’s a second wine list that is categorized by the oldest vintages – the most rare – that have been plucked and purchased for L’Express in small quantities. If a client hears through the grapevine (no pun intended) that there is a particular bottle stashed in the inventory, he refuses to serve it until the wine has matured in the aging cellar and is ready to go on the list.

With a small prep kitchen behind the dining room, the real magic happens in the basement – a secret, dress-rehearsal  kitchen where nearly all items on the menu are made from scratch. Mario leads me down a narrow staircase, past heavy-duty equipment where a very friendly group of employees greet me with a cheerful “bonjour!”

There’s a lot going on from mise-en-place to dessert prep. I wiggle my way into the kitchen where I meet chef Jean-François. An enormous cauldron sits in the center, bubbling away – undisturbed – with a life of its own.

“Veal stock” informs chef, “without it, there wouldn’t be a base for most of our dishes”.

After the 30 year reign of L’Express’ veteran chef Joël Chapoulie, Jean-Francois took over the title of executive chef four years ago. Operating the kitchen like an “orchestral conductor,” he maintains an excellence that is evident upon execution of L”Express’ celebrated dishes. Although there is no need for improvement, chef will occasionally tweak a recipe to elevate or modernize, without actually changing it. Seasonal, rotating dishes on the side of the menu serve to support the classics, allowing room for creativity while respecting tradition.

I assisted Jean-François in the preparation of two dishes, Beef Tartare and Veal Kidneys in Mustard Sauce (Rognons de Veau). As luck would have it, he has generously shared these recipes.

We began with the tartare. It was as quick, simple, and focussed on great ingredients – 0live oil, capers, onions, paprika, red wine vinegar. A Boston filet in a depth of vibrant red was ground in la hachoir  to a fine consistency. Jean-François went over the nuances of what turns a good tartare into a great one. “Crush the the ingredients gently,” he instructed while I combined the elements of our dish together, “this is what brings out the flavor”. Whisk & squish, whisk & squish chimed in my head like a bad pop song as the we dressed the meat that would grace our dinner plate.

Just look at the end result.

As I got up close and personal with our Veal Kidneys, chef gave me the rundown on this signature dish.

After removing the fat, our veal kidneys were sliced in rounds. They must be incredibly fresh to make this dish, and typically arrive at the bistro the night before they are served. I pulse around between my fingers – the texture is soft and silky with a jeweled ruby center. As per chefs instruction, they are best served rosé.

Into a hot pan they went with a fistful of button mushrooms. With the exception of a rather theatric flambé courtesy of a generous splash of Xeres, Jean-François made it look effortless.

Roasted potatoes, arranged in a circular crown, were filled with the mustard-sauce coated veal kidneys.

This deserves a standing ovation. 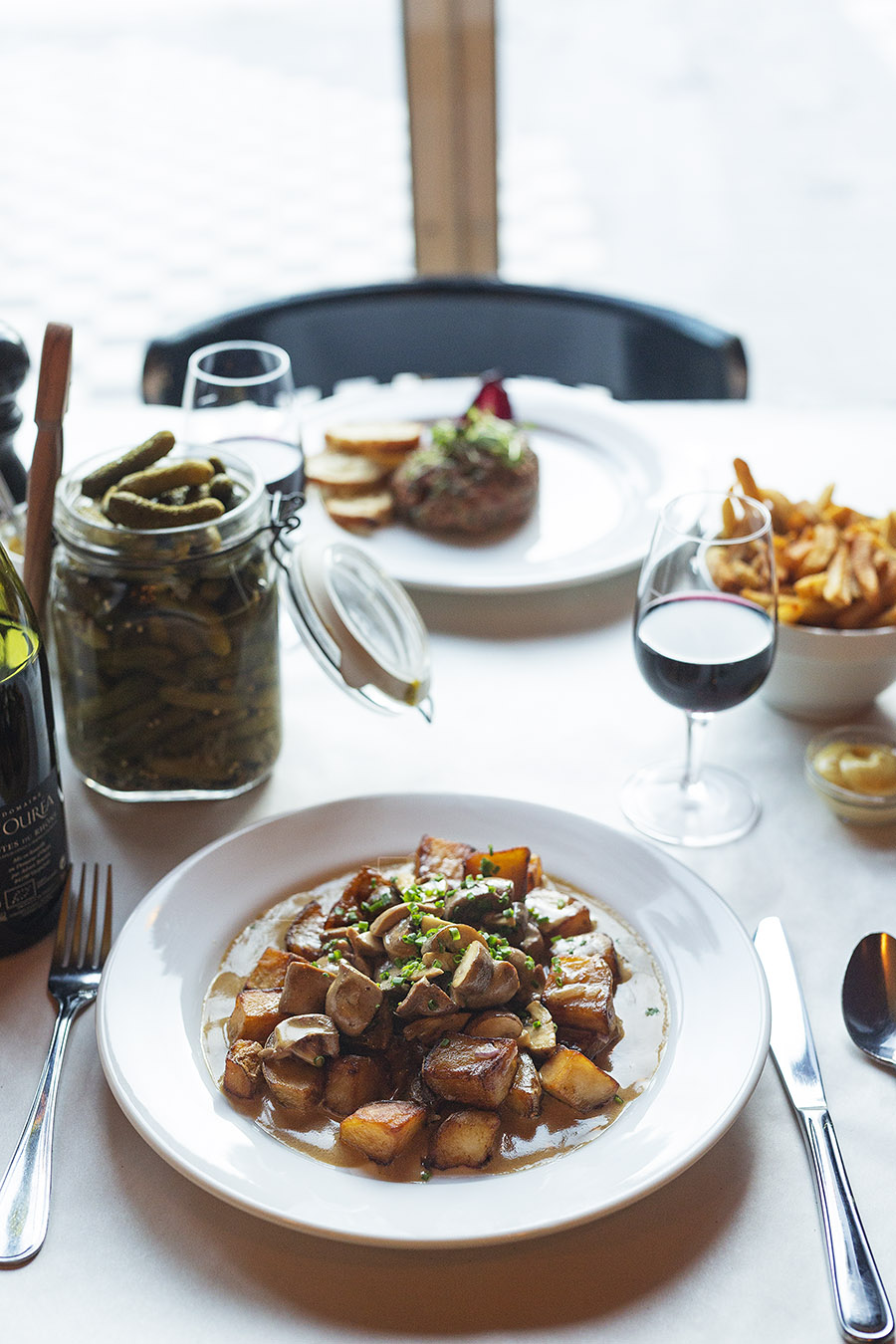 As I left l’Express on that January day with a happy heart and a full belly – the temperature plunged to a bitter minus 23 degrees, I asked myself this:  How can a city that’s so cold exude so much warmth?

Not only does l’Express embody an unpretentiousness that is unique to French Canadian culture, it has an honest, nous sommes bien dans notre peaux vibe, which translates to “we are comfortable in our skin” –  just as we are. Add an ease of attitude that can charm just about anyone, it’s safe to say that Montreal is one of the coolest cities in the world that’s home to one of the greatest bistros.

L’Express might be turning forty, but she’s been a star since day one.

*Special thanks to Josée Préfontaine, Mario Brossoit, Jean-François Vachon and the team at L’Express for their time and patience. An extra special thanks to Robert Gendron, who graciously made sure that my wine glass never empty.