Restaurant Spotlight: In the Kitchen with Coya 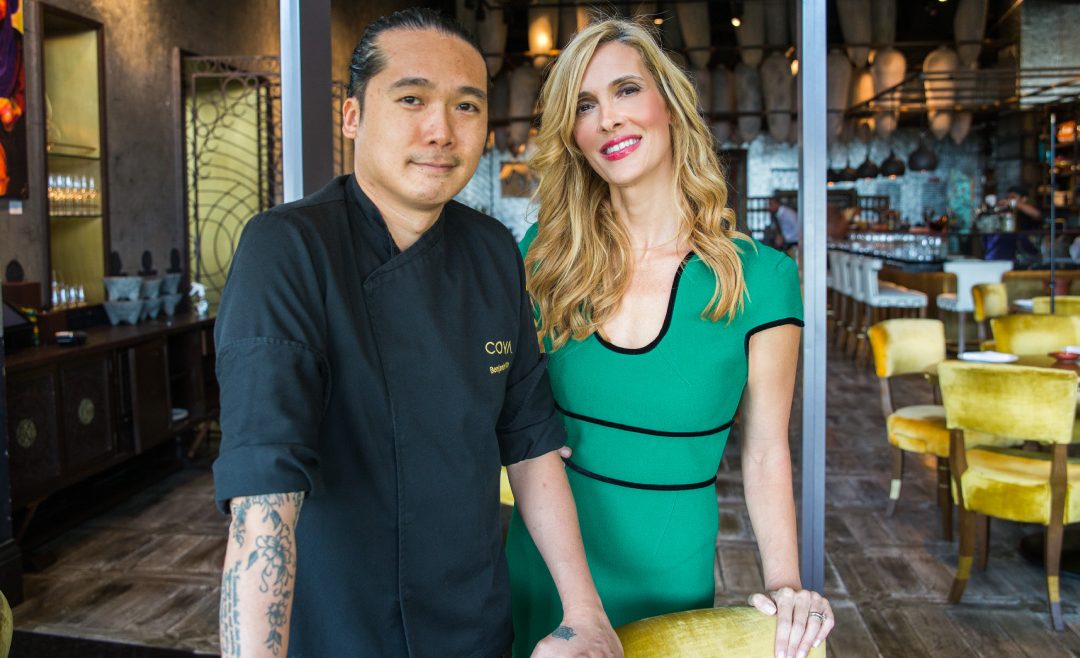 How does it feel to be whisked into an era where time stands untouched by the hands of a clock? Walk into Coya and you’ll soon find out. To say that this Peruvian gem is majestic is an understatement, in fact, Coya has captured each and every detail within its carefully crafted space with elegance and intrigue.

Pockets of lush, hanging greenery generously embellish the restaurant, and although the space is grand, seating is as social or as private as you wish, with little alcoves hidden among quiet corner spots.

There are jewel-tones (hence my choice of dress) and eclectic colors juxtaposed among wood, leather, velvet and brass. I could go on about the decor, but with all that I’ve said, I still haven’t done this space justice. If Coya’s surroundings are a visual feast for the eyes, just wait until you get to the food.

It was early when I arrived at the restaurant. Servers were setting tables and sous chefs were prepping their mise-en-place for a busy lunch service. Still, there was an energy and a buzz within Coya’s walls that could not be ignored. Something tells me that if those walls could talk, they would ask you to have a seat, grab a drink, and lose yourself over the next few hours.

And lose myself I did. I’ve wanted to get into Coya’s kitchen for quite some time now, and as I would soon discover, it was totally worth the wait.

When I met Coya’s head chef Benjamin Wan, it was clear at the outset that his expertise was far more than what I bargained for – in fact, Bejamin was crowned BBC Good Food Middle East Chef of the Year just days after our meeting. Born in the UK to parents from Hong Kong, Benjamin spent his early culinary career working in London at various Michelin starred restaurants.

About his culinary training Benjamin says, “My cooking background is classic French. Coya is a huge step away from that, but my Chinese background helps a lot in pushing Coya forward.” With experience ranging from private chef in Saint Jean Cap Ferrat to head chef at Dubai’s acclaimed La Petite Maison, as well as rigorous training in London before joining Coya, Bejamin’s skill and passion is impressive to say the least. Watching those skills come to life behind-the-scenes is a privilege I was fortunate to experience.

We headed directly to the ceviche counter where all of Coya’s raw preparations take place.

Here is where you can see the influence of Japanese and Chinese food culture woven into Peruvian cuisine. Benjamin informed me that we would be making three dishes – two fish ceviches and a beef tataki. On his personal food philosophy and how it ties in with Coya, Benjamin is clear on his approach “What we do is led by the quality of ingredients. Our food at Coya is not overly fussy, we let the ingredients speak for themselves. We lift the whole dish with simple combinations, but with intense flavors”.

Those intense flavors were prepped and ready to go when we set out to conquer our first dish, a Seabass Clásico. A beautiful white-fleshed seabass was diced into cubes and placed in a shallow bottomed bowl.

After seasoning the fish with sea salt and a fat squeeze of fresh lime juice, Benjamin tossed the ingredients together – his skill apparent in the deftness of his hands. He made it clear to keep the fish moving and tossing to allow the lime juice to “cook” the fish evenly. The fish must be cut into uniform cubes – too small and they’ll overcook, too big and they’ll be underdone.

As we added chopped coriander and fresh red chili into our bowl. The ceviche seemed so reassuringly simple until Bejamin took out the big guns – White Tiger Milk – the top secret potion behind this dish. Tiger Milk (“leche de tigre”) is the Peruvian term for the wet marinade that cures fish and seafood in a ceviche.

Coya’s white Tiger Milk is a laborious process, one where fish stock is infused with ginger, celery, onions, and coriander leaves before being blitzed together into a pearl white nectar. We added the Tiger Milk tossing for a few more minutes until the fish was ready for plating. We garnished the dish with cancha and choclo – both large kerneled varieties of corn found in Peru and Equador (one is fried, one is blanched). After adding a few slices of red onion, some coriander cress, and cubed sweet potatoes to finish off the garnish, we were done and my appetite was wide open for our next dish.

Coya’s Tuna Chifa was similar in preparation to the Ceviche Classico, with a variation on the ingredients. The tuna was cut in similar sized chunks, and tossed with salt and lime juice in the same way.  We spun through sesame seeds, lime juice, and Chifa Tiger Milk – a fiery red liquid with classic Chinese ingredients of ponzu, chili garlic paste, and sesame oil. One whiff of the Chifa Tiger Milk and you can understand why it lives up to its name – deliciously powerful stuff.

The dish was garnished with a single crispy prawn cracker, chopped chives, and sliced spring onion. With the Tuna Chifa proving to be a tough act to follow (a favorite of mine), and with my stomach howling louder by the minute, we were on to our final dish.

A Beef Tataki of Australian Wagyu sirloin was our last stop on the ceviche counter. While definitely not a ceviche, this tataki is indeed a raw preparation. With only a slight sear on the exterior of the lightly marbled, crimson colored meat, the texture of the flesh was soft, buttery, and succulent. Benjamin had sliced the meat into paper-thin slices, lightly patting it down to render it almost translucent.

The meat looked insanely appetizing in its raw, unadorned state – I could have eaten the whole plate just as it was!  Thankfully I didn’t, there was some great stuff left to add. Benjamin generously spooned on a thick layer of Chili Dressing made with chopped red and green chili, roasted garlic purée, lime juice, and olive oil. It smelled as beautiful as it looked. A Cashew Nut Purée was carefully piped, dot-by-dot, on top of the meat. I was intrigued by the next ingredient – a crispy quinoa – which was cooked, cooled, and toasted to a crunch before it was strewn on top of the dish.

Grilled leeks, chopped chives, and pea shoots rounded out the garnish, and lucky for me, the tataki was ready to serve, but almost too stunning to eat.

What struck me about all three dishes was not only the caliber, freshness and textures of the sea bass, tuna, and beef, but the sheer finesse in execution and delivery. They all seemed to be such simple preparations, yet each had a depth in complexity that went far beyond the ceviche counter – the labor intensive hours of preparation leading up to each finished masterpiece were definitely not lost on me. There is a reason why Benjamin has earned his accolades, and why Coya has risen to the cream of Dubai’s restaurant scene in such a short period of time.

Thank you Benjamin and Coya for your finesse, your exquisite preparation, effortless execution, and attention to each and every detail. Look out guys I’ve got my eyes on your Robata grill next!

Dress by Roland Mouret in the Dubai Mall