In the moment with Thomas Keller 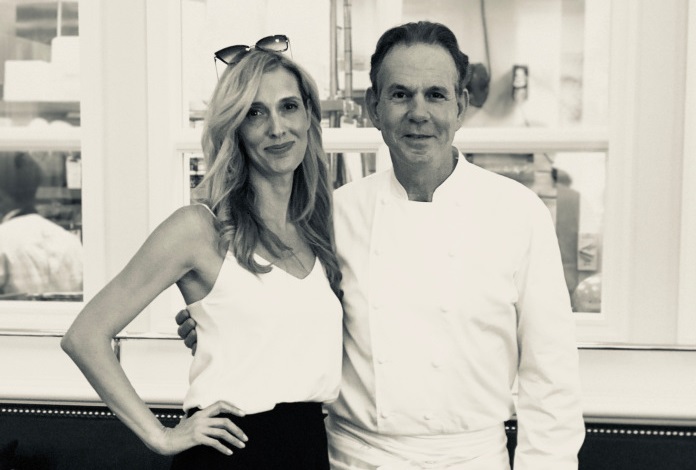 Today, I met a legend.

There are moments in life that sweep you off your feet and leave you feeling like a teenager all over again. That’s exactly what happened when I came face-to-face with my culinary crush, and the inspiration behind my passion in the kitchen.

To say that I’ve been a fan of Chef Thomas Keller since my food-obsessed husband first introduced me to the French Laundry cookbook over fifteen years ago is an understatement. It’s been admiration from afar ever since, as I’ve cooked my way through each and every one of his books, one perfectly crafted recipe at a time.

I had the chance to slip into chef Keller’s Bouchon Bakery – his first in Dubai – to celebrate its launch and to have a tête-à-tête with the man himself. Tall, elegant, and iconic, Keller stood at the back of the bakery in his crisp flawless chef’s attire. As I walked towards him, I could feel my heart beating louder than thunder – I swear I could see it rise out of my chest! I hope he doesn’t hear this, I thought to myself. With his hand outstretched towards mine, he welcomed me with the grace of a true gentleman, and the warmth of a kindred spirit. It took my breath away.

Once my hands stopped shaking and I could actually carry on a conversation, Keller spoke affectionately about the love and care he put into Bouchon Dubai. With nearly three years in the making, it is clear that this is a venture that is close to his heart. He talks about his team with trust and respect – the people on the ground that will maintain excellence long after he flies back to the US. Just one look at his staff and you can feel the pride that each one of them has under Keller’s leadership. These apples certainly do not fall far from the tree.

Inspired by a small bakery in Paris below the apartment where Keller lived in his twenties, Bouchon is light, airy, and inviting. French pâtisserie, macaroons, scones, artisanal breads, along with signature classics of Nutter Butters and TKO’s (Thomas Keller Oreo), are beautifully displayed in abundance at the main counter.

As I sampled a few of the main dishes on the menu, it was clear that no stone was left unturned in terms of detail and finesse. In fact, Keller assures me that nearly everything on the menu can be found in his bakeries in New York and California, with the exception of a few dishes that reflect Bouchon’s Middle-Eastern location.

The 7-star Michelin chef spoke openly about the reasons why he has no plans to open a fine dining restaurant in the region. Since fundamental ingredients of flour, butter, and eggs are relatively universal (hence a bistro or bakery makes sense), it’s relatively simple to safeguard the quality of products that rely on those staples. Fine dining is a whole different animal. In the world according to Keller, it’s all about accessibility to fresh and local ingredients. In other words, book your tickets to California (the French Laundry, Ad Hoc)  or New York (Per Se) for a taste of haute cuisine the Keller way.

Just before leaving Bouchon, I set out my collection of cookbooks out in hopes that chef would sign them. He graciously obliged, signing one book after another, crafting a personal message in stunning calligraphy. Even in his handwriting, Keller’s eye for detail reflects the finesse and refinement that has earned him his legendary status. Each of my books held a different inscription, with one dedicated to my three children.

“It’s all about sharing”

“It’s all about time and temperature”

“It’s all about memories”

“It’s all about family”

There was one book in particular that I accidentally left behind at home. Ironically, it was that first Thomas Keller book that my husband gave me all those years ago.

Thank you for your words of wisdom chef Keller. I’ll see you in California for a culinary spotlight in your kitchen…and to sign that last book.

Special thanks to Bouchon Bakery Dubai and the team that brought it to life.

Find my adaptation of the TKO (Thomas Keller Oreo) here.