By: Lidija Abu Ghazaleh|Published on: Feb 22, 2020|Categories: In My Kitchen, Restaurant Spotlights| 0 comments

Somewhere on a quiet corner of Belgravia sits a charming Georgian mews, a two-story townhouse where potions, elixirs, and tinctures simmer away, waiting for a culinary wizard to whisk them into an epicurean fantasy and a moment etched in time.

Muse, a gastronomic autobiography and chef Tom Aikens latest restaurant, is poetic, masterful, and pays tribute to the people who have inspired his life and career. An experience-driven, fine-dining sanctuary, it’s the latest heavyweight on London’s culinary landscape. Contrary to what I thought was a play on words, the meaning behind the name has nothing to do with the fact Muse resides in an actual mews. The apropos definition, according to Tom, refers to “a person or personified force who is the source of inspiration for a creative artist”.

When I arrive on a chilly Monday morning, a black bicycle that I would later find out belongs to the wizard, sits on the side of the townhouse. There are potted plants underneath the windows, with a black door hiding off to the side that rescues me from the cold. 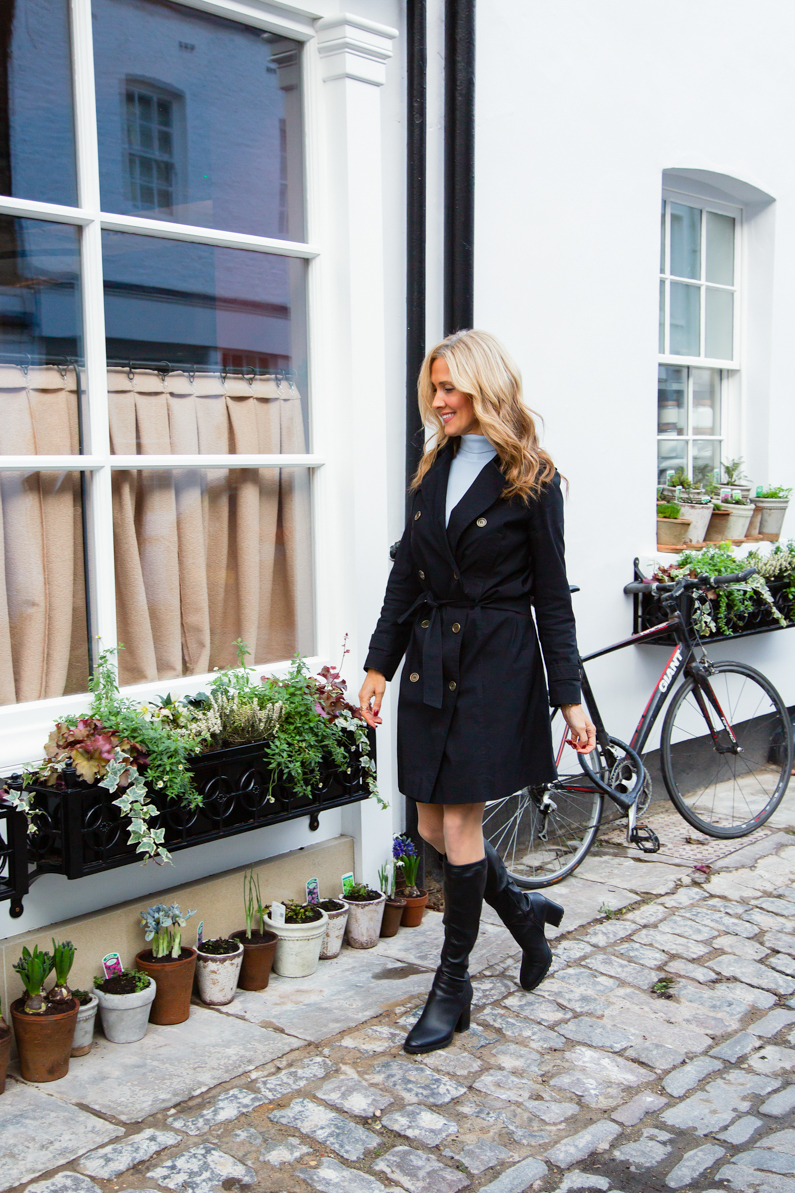 I step inside, unsure of what to expect. Inspired by Tom and designed by Rebecca Korner, Muse’s interiors are a beautiful mélange of various points in time. The colors are warm and lush with vivid pops of fuscia and turquoise accentuating the space.

There are layers and textures in abundance, from the peanut-shaped metallic liquor cabinet that’s perched on a wall in the deepest shade of wine, to the theatrically-marbled kitchen counters. With a touch of understated elegance in every detail, there’s a contemporary ease that reflects Tom’s wildly creative aesthetic, his forward-thinking approach to food, and elements of haute cuisine.

Spread across two floors with a seating capacity of 25, Muse’s setting is an intimate one. Each level hosts an open kitchen, the bottom for pastry, the top for hot. With seats across both counters, guests are privy to a front row experience of Muse’s culinary magic.

Most of the crockery is bespoke and made by local artisans. I notice a row of small clay pots that are carved with almost Shakespearean-looking faces – 18th century Toby Jugs – hand-picked at an antiques market in Sunbury-on-Thames. They add an element of playfulness to the kitchen, so much so, I wonder if the wizard and his team should have their own set of jugs made in their likeness.

With Tom’s team of six behind him, there’s a massive amount of prep-work that goes on in both kitchens. It certainly does take a village. The amount of precision that’s needed to keep a complex, gastronomic operation running like a well-oiled machine is something that us mere mortals, food critics, and part-time epicureans often forget.

Upstairs, head-chef Seamus and sous-chef Joe talk me through some of the dishes that Tom has in store for us. The mood in the kitchen is a light one, a far cry from the seriousness I would expect from the team behind the chef who earned his second Michelin star at the tender age of 26.

I’m instinctively drawn to a large cauldron holding an aromatic potion that’s simmering away, undisturbed on the hob. The smell is so intoxicating, I swear it could put the population of London into a hypnotic trance.

I would soon discover the secret potion – veal stock – is just one of the many secret weapons in a great chef’s arsenal. I marvel at everything around me. There are roasted fish bones, creamy purées, and fresh crab in epic proportions. Not a single one of my senses is left un-stimulated.

I go down to the pastry kitchen where I’m greeted with a loud, rhythmic, thudding sound. There’s another trance-inducing smell in the air, this time a sweet one. “Cornflake praline, we smash it for the dessert,” says pastry chef Charlie – aka Charming Charlie, who I assume gets his nickname from the naughty little glimmer in his eyes that all dessert-centric chefs should have.

When Tom swoops in to prepare our dishes, there’s a breath of excitement in his voice. Unsurprisingly, Muse has opened to stellar reviews – an impressive feat for a restaurant that’s barely a month old. We talk about the philosophy behind the menu. Each dish has a name and a reference to a story – a point in time within his childhood and career.

Creating lasting memories is something that ‘s very close to Tom’s heart, and it is one of the principals that Muse is founded upon. “I wouldn’t say we are a typical restaurant,” says Tom, “we’ve tried to make something different and unique. For me, the way you do that is to give people a lasting experience from the moment they come in. When they leave, they’ve had a special experience that will be remembered. It’s trying to stand back from the crowd to do something extra special that is meaningful and authentic.”

Curious to try our dishes, Tom hands me one of two menus. This isn’t just any menu, it’s a moveable prelude, one with an intricate paper pop-up inspired by the trees that Tom would climb as a child. If you look closely, you just might see a small cut-out of the young wizard, climbing his way up to the top.

Written inside is an inspiring passage by Tom. I could tell you what it says, but I truly believe that some things in life should remain a mystery.

I’m given the tasting menu. This time, with a pop up of Muse herself – whimsy and wizardry rolled into one.

Beyond intrigued at this point, and although it might seem counter-intuitive, we start our session with dessert. Not one to question wizards or legends, I correctly assume that there’s some method to this madness. “Cows & Cornflakes” – a dessert that takes Tom back to his childhood – is a playful rendition of summers past spent with his family in the Auvergne region in France.

As the story goes, Monsieur Brojie, a dairy farmer who lived above them, would milk his cows and drop off fresh, warm milk every morning at dawn. By the time breakfast was served, the cream would rise to the top, settling into a “beautiful, sweet cream enriched milk.”

Monsieur Brojie would be proud.

Just Down the Road

Paying tribute to Tom’s Norfolk roots is “Just Down the Road.” Since most of Muse’s menu is predominately from this area, the meaning behind the name is a fitting one. Tom reminisces about the beautiful Guernsey cows residing at the Old Hall Farm that he says “are like having a pet dog. They’re the cutest looking cows ever and have names that will actually respond to. So if you say ‘Wilfred!’ they will come over to you.”

Ricotta, honey, and truffle form the key components of the dish, while a burnt leek purée is brushed on the bottom of a plate like paint to a blank canvas. Tom gently pipes on ricotta, also infused with leek which is cooked in whey before being turned into a crisp. Zero wastage here.

Honey jelly and winter truffle are placed on top, while burnt leek ash and leek vinaigrette finish the dish. It looks beautiful, delicate, and refined.

I ask Tom if he lies awake at night dreaming of how to plate. “Sometimes the plating can be more of a ball-ache than the actual recipe,” he says, “It’s all very well having beautiful ingredients, but if it looks like a piece of shit, it doesn’t really work. You are not only thinking of the ingredients, you must think of everything coming together.”

Beetroot is one of Tom’s favorite ingredients. Here, he maxes out the flavor by deriving it’s essence. Three different types of beets – Chioggia, golden, and red – star in this crimson show.

A  beetroot consommé made with fermented cucumber juice helps cut the sweetness of the beetroot and adds another depth of flavor. Black pepper and cucumber jelly, blood orange and Nasturtium leaves “because they are quite peppery and quite pretty,” are dotted on top. It’s finished with pine oil,  pine salt, and blood orange zest. I know I run the risk of sounding cliché by saying this dish is too beautiful to eat. But eat it I do. Happily. Without sharing.

Intrigued by the name of our last dish, I ask Tom if there’s a hidden meaning behind it. A torrid romance perhaps? A long, lost, saucy memory filed away deep within his subconscious? “There’s always a story,” he muses. The real story behind it, however, goes back to his two mentors, Pierre Koffmann and Joël Robuchon, as well as the time he spent in France. Each has had a significant impact on his love affair with food. This dish honors both culinary legends by bringing together ingredients that each chef was renowned for – Robuchon for the mashed potato, and Koffmann, for his duck.

The love affair begins on a bed of rich potato purée with duck-fat-poached turbot nestled within. There’s duck sausage made of duck leg, breast, and confit. Clearly Koffman’s birds of Gascony are celebrated here.

Concentrated with beautiful flavor, the bones of both the confit and turbot are roasted together to form the basis of the jus that’s finished off with… drumroll please… a bit of duck fat.

It’s sweet, luscious, and intense. “Pretty damn good,” admits the wizard, as I realize that this was the aroma that put me into a trance. Tiny, delicate garlic sea snails end the affair, and after just one bite, I’m left wanting more.

As we wrap up our session, it’s back to business for Tom as he dashes up the stairs faster than a tree-climbing boy. I ask if we can take a picture of the team. He rounds up his troops. Just like the wizard, they come armed and ready with bewitching grins and eyes sparkling with mischief.

Looks like Tom’s Muse has cast her spell on us all.

Shot on Location at Muse, London

* Special thanks to Tom Aikens, Laura Thompson, and the culinary team at Muse for their warm hospitality and occasional hilarious kitchen commentary.