The Pera Palace Hotel – A Taste of Istanbul: Part I 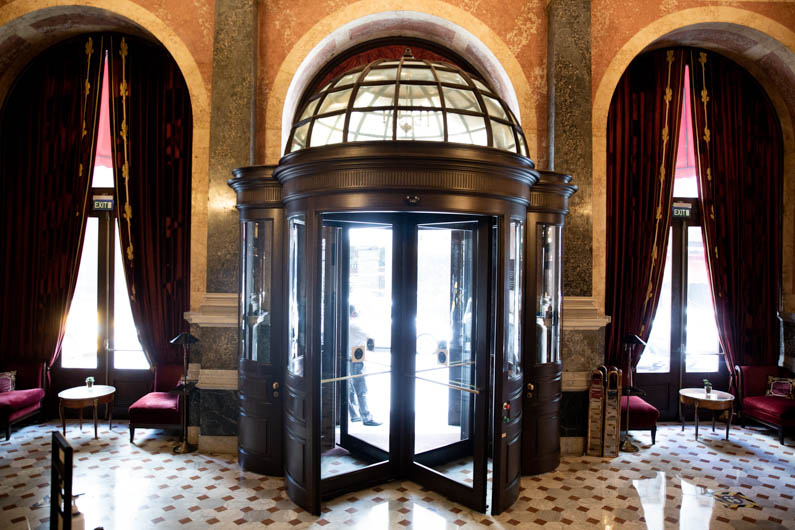 To experience the passage of time through a physical space is intoxicating.  Imagine peering into a world you never knew – where people, thoughts, and ideas shaped the very foundation of who we are.  To be a fly on the wall of centuries past?  I can’t think of anywhere I’d rather be.

Stepping into Istanbul’s Pera Palace Hotel felt like I was floating through a dream suspended within a fusion of art, antiquity and architecture.

The oldest European Hotel in in Turkey, Pera Palace sits in the charming district of Beyoglu, once known as Istanbul’s “little Europe”. One of the cities’ most iconic landmarks, the hotel was built in 1892 with the intent of hosting long distance passengers of the Orient Express.  Lush and sophisticated, it oozes an opulent richness that pays tribute to centuries past.

I walk through the lobby and spot a nineteenth century wrought iron elevator sitting at the bottom of the hotel’s grand winding staircase. With manual mechanics that still function to this day, it’s human engineering at its best! It’s a truly nostalgic sight with a little Agatha-Christie-detective-story-vibe to-it. I would soon find out that vibe had a reason.

With the intent of capturing a glimpse of the hotel’s dining experience, I was so moved by my surroundings – I almost forgot why I was there. A melting-pot of architectural styles –  neo-clasical, oriental, and and art nouveau – you’ll see beauty from every corner of your eye. Cinematic in its tone, arresting in its grandeur.

My journey began in the Grand Pera Ballroom.  White, lofty and dreamy with chandelier-clad ceilings,  I was catapulted through time and soaked up the romance from the center of the ballroom. It was mesmerizing, and at the risk of sounding cliché, it sent shivers through my spine.

I dove into my imagination, picturing iconic guests who’ve passed through these doors: Kemal Atatürk, Earnest Hemmingway, Greta Garbo, Jacqueline Kennedy Onassis, Agatha Christie to name just a few. Rewind to that detective story vibe. I wonder if this was was where Agatha Christie was inspired to write  Murder On the Orient Express.

I picture people of the past. Black tie clad gentlemen swooning over well-dressed women in  billowy ball gowns that swirl throughout the room, dancing the night away …. Here I go again, pretending to be a fly on that wall.

I step out of the ballroom and into the Pasha Room. Filled with antiques, a grand piano sits in the corning, and floor to ceiling windows peer through luxurious drapery.

The room is refined and feminine, and since yours truly is a lady who unapologetically loves to lunch, I dine on sea bass skewers and drink rose. I give my arm a big fat pinch – Wow! I’m so privileged to be here.

The hotel’s five star service – complete white gloves and Christofle table settings – is second to none, and coupled with the room’s overstated century elegance, I felt like a princess.

I made my way to the Kubbeli lounge for afternoon tea time à la Istanbul  where I nibbled on buttery scones, pretty sandwiches and tiny tea-cakes. The lounge is a cross between Breakfast at Tiffany’s meets Alfred Hitchcock – soft and dainty but with a slightly dark edge…

.. dripping in lush red velvet and accented with gold,  it screams opulence.

Cascading sunlight streams through mile-high domed ceilings, I wonder what the mood would be like after dark.  Something tells me that an evening cocktail would be a very sexy proposition.  Note to self: must come back at midnight. 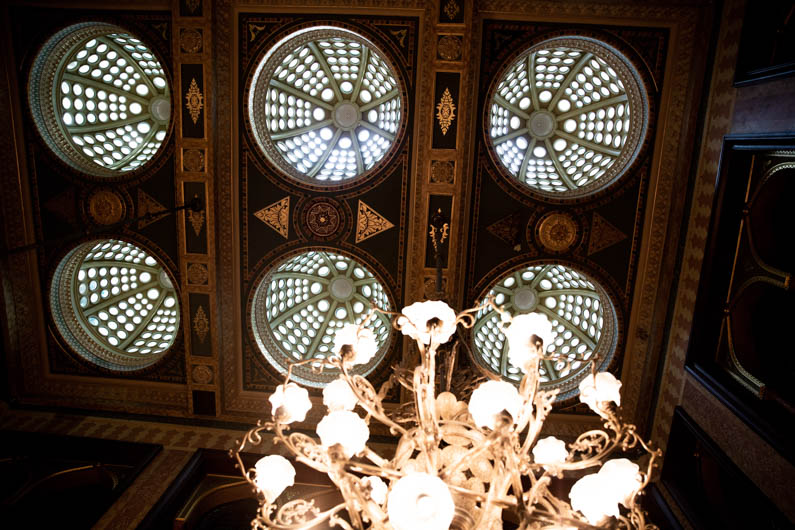 The most charming little patisserie in at least fifty shades of shades of pink, Patisserie de Pera overflows in abundance with pastel meringues, homemade chocolates and French pastries.

It was my grand finale’s icing on the cake. If my dessert-loving-pink-obsessed daughter were here, I wouldn’t make it out without a fight…

A  sinful, gluttonous masterpiece called the Chocolate Golden Ball looked me straight in the eyes. It was a standoff, and since sugar-induced willpower has never been my forte, the dessert won. Bittersweet chocolate spheres filled with mascarpone cream, fresh fruits and strawberry ice were dusted with gold and served with fresh tangerine sauce. Temptation got the best of me as I dug in before the photographer had a chance to take a picture…

It was a fitting tribute to my taste of Pera. Rich and decadent with a touch of the unexpected.

Farewell Pera Palace, until we meet again.  I can’t wait to uncover more of your twists, turns, surprises and secrets. In the meantime, save this fly a spot on the wall.

Shot on location at The Pera Palace Hotel